According to a report on the website of Nature magazine on July 14th (July 15th, Beijing time), astronomers believe that 23% of the total mass of the universe is composed of "dark matter" that is diffused and invisible to the naked eye; A "dark matter" study of microorganisms was conducted. They used single-cell DNA sequencing technology to sequence the genomes of a variety of microorganisms and found that the microorganisms are far richer than we know. The research also revealed surprising associations between different species.

Single-cell sequencing technology allows scientists to decipher the genome of a single cell by increasing its DNA by 1 billion times, opening the door to studying microbial "dark matter" and helping to clarify the relationship between microbes and their relationship with other species . The research team led by Tan Jia Walker of the United States Department of Energy's Joint Genome Research Institute selected 201 cells of microbes and paleobacteria and read some of their genomes (ranging from 10% to 90%, depending on different cells) . These microorganisms are derived from nine different living environments, including hot-water craters on the ocean floor and underground gold mines. None of them have been sequenced or cultivated in the laboratory.

Research shows that many boundaries between different lives are not as solid as previously thought. For example, a microbial system synthesizes the basic components of DNA and RNA, purine bases, using enzymes previously thought to exist only in ancient bacteria. The study also showed that there are three sigma factors in the paleobacterial cells that are mainly responsible for initiating RNA transcription (the first step in protein biosynthesis). Previously, scientists believed that these sigma factors only appeared in bacteria.

In addition, the researchers also found that a bacterium "recorded" the three-letter series of the stop codon UGA. In almost all other microorganisms, this series of nucleotides sends a signal to the cell to stop it from translating RNA into protein; but in this microorganism, it tells the cell to make aminoglycine. Scientists have also found the same "record" activity in another bacterium. This shows that the code of life may be more flexible and diverse than scientists think.

Walker said: "We have only sequenced a small number of bacteria, and there are so many novel discoveries, which shows that the biodiversity of bacteria is far beyond what we know. About 16,000 cells need to be sequenced to cover Half of the world â€™s unresearched microbiome. "

Jeffrey McLean of the Craig Venter Institute said: "The latest research highlights the power of single-cell genomics, but it also shows that we need to work harder to fill the knowledge gap of microbial diversity on Earth. "(Reporter Liu Xia)

The original meaning of "dark matter" of microorganisms refers to microorganisms that have never been cultured or sequenced in the laboratory in the past. In fact, in many environments, the vast majority of microbes cannot be cultivated by traditional methods-our traditional microbiology studies only the tip of the iceberg of the vast world of microbes. But scientists can already use single-cell sequencing to dramatically increase the DNA from a single cell by a billion-fold, and then decipher its genome, thus opening the way for the study of these "dark matter" in the microbial community. The results in this article are based on this method.

We have not-so-usual multi-sided dice like 12, 24, 30, 48, 60, 120 sides die. They have different application in role-playing games or board games.
These multi-sided dieare brand new and are great for playing with, or other miscellaneous crafting.

Find in Bescon the Great quality and great shape dices and get a nice variety of colors! 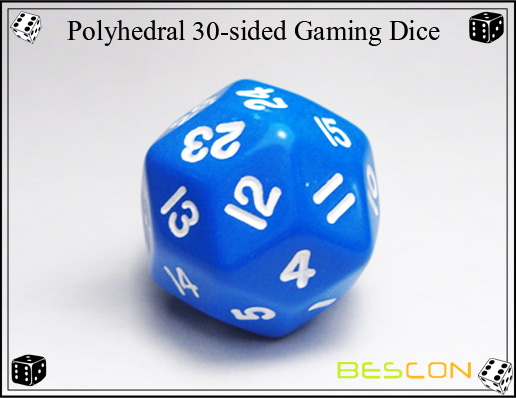